- December 11, 2011
The master bathroom has been neglected since the drywallers finished over a year ago. Before Eric and I can start tiling, a few items needed to be taken care of.
I had been looking off and on for a low voltage lighting solution for the shower, and finally came across some 2.5" 20w recessed halogen fixtures from
Seagull Lighting that would work. The
original plan was to put in one in the niche, and one directly above the two shower valves, but some of the framing above the shower got in the way. 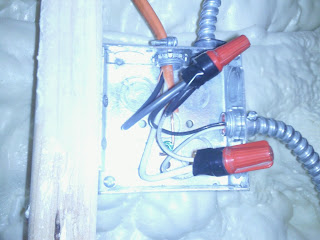 This is what happens when you don't plan
for lighting before the framing! The 120VAC to 12VAC transformer is in an access panel on the other side of the shower wall in the bedroom. We could have put the transformer access in the bathroom, but there was no easy place to put it without having to deal with a tiled wall. I ran some 10gauge Romex cable (orange) from the transformer to a junction box in the shower wall, and then flex conduit from there to all three fixtures with standard 14 gauge wire. Since the run from the transformer to the junction box is taking the current for all three fixtures, I figured I should use a lower resistance line. It might not matter on the relatively short run, but it's good practice for when we do a longer run (25 ft+) later.
Eric masterminded the pouring of the custom shower pan. The plumber installed the PVC mat that leads to the shower drain correctly against the wall studs, but the corners folded up ('pig ears') were too thick to allow the installation of the backerboard plumb with the rest of the wall. Eric installed a 1/4" GreenEboard™ over the PVC lining to bring the wall flush the wall above on the outer walls, and two pieces of DensShield on the short inside walls. The DensShield is a popular alternative to Durock, and makes for much cleaner cuts. 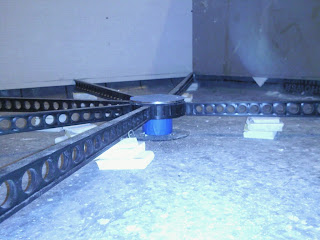 Once the wall board was installed, we moved onto pouring the shower pan. The shower pan has to run to the drain at 1/4"/foot slope. Neither of us have ever poured a shower pan before, so I found this cheater system called Quick Pitch to make the grading worry free. We marked the perimeter of the shower with a laser level for marking the edges, and then shimmed the quick pitch guides up to the mark.
Rather than using regular cement, we used a sand mix with portland cement. This allows for easier management of the cement, since it was like handling very wet sand instead of dripping cement. It would have been difficult to keep the grade with cement that wants to level itself. The shower pan turned out really well. It has a very gradual slope that water will travel, but not so much where you notice it when your standing on it.

Popular posts from this blog 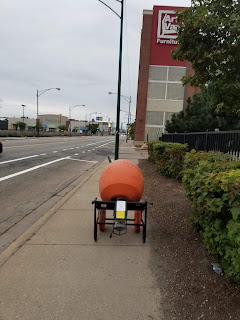 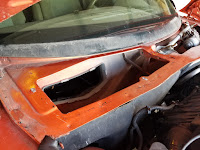 After watching a number of youtube videos, I discovered there's a commonly worn out cover under the windshield cowl.  The rubber piece covering this hole (called the fan access) was completely damaged and sunk into the hole.  Water was just pouring in from windshield, then under the hood, then into this hole right into the passenger side behind the glove box.

A terrible side effect of having water pour into the access hole is damaged HVAC fan and its resistor.  The 'resistor' enables the fan to have different speeds.  So, it looked like in the end, the water started leaking in, damaging the resistor and the fan would only run on high setting (no resistor).  Then after time, more water would cause the DC motor to fail (rusted brushes, bearings, etc.).  The last symptom was a soaking wet passenger floor carpet.   I replaced both the resistor and the fan.  Getting the fan in and out (behind the glove compartment), and removing the fan housing was a pain. 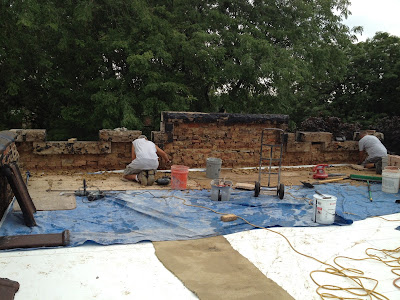